Pathogenesis of symptoms attributable to the common cold The Common Cold The common cold is as an acute, self-limited catarrhal Latin catarrhus, to flow down syndrome limited to the mucosal membranes of the upper respiratory tract. Recently, "viral rhinosinusitis" has been suggested as the technically correct term, since CT scanning shows abnormalities of the paranasal sinuses in most cases. However, "cold" is preferred for clinical use since "rhinosinusitis" suggests to patients the need for antibiotics. The common cold accounts for up to three-quarters of all illnesses in young infants and up to one-half of illnesses in adults.

Mir, MD; Darilyn V. Moyer, MD; Kelley M. This article was published at www. The findings and conclusions in this article are those of the authors and do not necessarily represent the official position of the Centers for Disease Control and Prevention.

A record of disclosures of interest is kept for each High Value Care Task Force meeting and conference call and can be viewed at http: Williams, MD, Deputy Editor, reports that he has no financial relationships or interests to disclose. 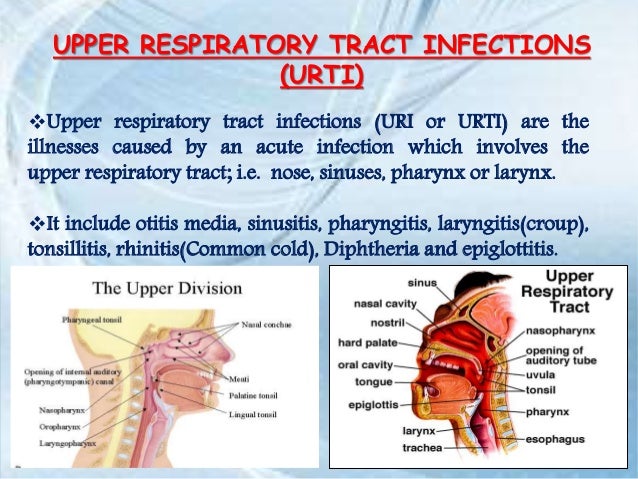 Requests for Single Reprints: American College of Physicians, N. Analysis and interpretation of the data: Drafting of the article: Critical revision of the article for important intellectual content: Final approval of the article: Administrative, technical, or logistic support: Collection and assembly of data:Upper respiratory tract infections (URIs) are contagious infections involving the nose, throat, sinuses, pharynx or larynx.

URIs range from the common cold—typically a mild, self-limited, catarrhal syndrome of the nasopharynx—to life-threatening illnesses such as epiglottitis. Respiratory syncytial (sin-SISH-uhl) virus, or RSV, is a common respiratory virus that usually causes mild, cold-like symptoms.

This area of the body includes the nose, throat, pharynx, larynx, and bronchi. The most well-known of these infections is the common cold. The respiratory tract is divided into two categories based anatomy.